The second stage of Shanghai curriculum reform puts forward the concept of “student development-oriented”, advocates changing the learning style of students, and cultivates student’s innovative spirit and practical ability. The key point is to strengthen the integration of curriculum and information technology, and to creat a digital learning environment. Physics has taken advantage of the trend. The Shanghai Middle School Physics Curriculum Standards (trial draft) clearly proposes that digital experiment system should be introduced into experiment teaching, which is the origin of DIS.

In the past 16 years, DIS R&D center has been insisting on independent research and development, pursuing original products based on teaching practice. It has obtained 59 patents, including 7 invention patents, 38 computer copyrights and 38 software products. In these series of intensive and high-quality intellectual property achievements, many achievements have fill the gap of domestic experiment teaching, and are at the leading level internationally.

At present, DIS has covered the fields of force, heat, sound, light, electricity, magnetism and atomic physics in middle school physics. It also has 78 sensors, 75 experiment instruments, 12 scientific inquiry systems and STEM products that support the experiment study of physics, chemistry, life science and geography in middle school, and take into account the scientific exploration in primary school. 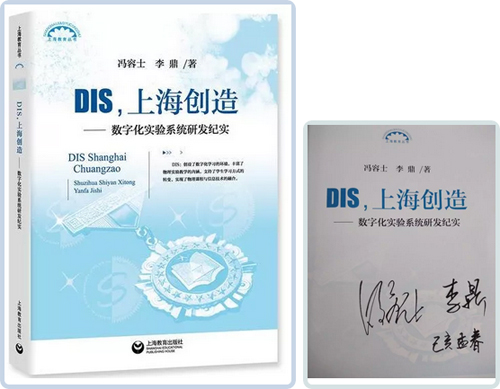 In 2014, the Digital Information System (DIS) project, led by Mr. Feng Rongshi, won the first prize of National Teaching Achievement (basic education), becoming the only one of the prizes to promote teaching development because of the innovation of education equipment, and has been widely used throughout the country. What is the password for the success of DIS? This book will give you the answer. The authors have been engaged in the creation of physics experiment for many years. They have integrated the creation technique of physics experiment summarized by themselves into the research and development of DIS projects, and made great achievement. They has further promoted the creation technique of physics experiment to more powerful DIS creation techniques. Through profound cases analysis and brilliant comments, the book shows the whole process of DIS development: both the difficult start in the initial stage and the peak in the growth stage. It is believed that the content of this book has certain reference value for carrying out physics experiment teaching and cultivating creative thinking.

This book not only introduces DIS itself as a digital experiment teaching equipment, but also deepens, enriches and improves DIS from many aspects such as concept proposing, product development, presentation of teaching materials, classroom application, etc. To promote DIS to the level of “creation” and summarize it as “Shanghai creation” is a true representation of the 16-year arduous process of DIS and the hard work, effort, collaboration and creation of the vast number of Shanghai physics teachers gathered in this process.

The first time I met Mr. Feng Rongshi was from a series of articles published in High School Science and Technology in the 1970s. The papers introduced how to make a large-screen teaching oscilloscope with a nine-inch image control system. In that era, oscilloscopes were still rare high-end instruments in middle school. Mr. Feng Rongshi studies for years to improve the weakness of the oscilloscope that the fluorescent screen was so small that the demonstration effect was poor. I am also a physics teacher. I am very interested in electronic technology and I love to do it. So I was attracted by these articles at once. I think that Mr. Feng Rongshi’s improvement on the oscilloscope was not only professional, but also very valuable to the physics teaching at that time. After further understanding, we knew that Mr. Feng and I graduated from the same university, Physics Department of Shanghai Normal University. In college, Mr. Feng was the backbone of the aeromodelling laboratory of physics department. It is no wonder that he is proficient in turning, milling, planing, grinding and drilling. He was one of the most outstanding physics teachers with strong practical ability in Shanghai.

In the 1990s, primary and middle schools in Shanghai began to promote education information technology widely. In physics classes at that time, teachers and students were still in using the spring dynamometer, balance, various electric meters and other relatively traditional and classical experimental instruments. Mr. Feng said that he would do experiments that could not be done or could not be well done by traditional experiment means. This has spurred the idea of applying digital technology and sensors to develop a new generation of experiment system (ie, DIS system). With the promotion of the second stage of curriculum reform and the support of the Municipal Teaching Research Department and the Education Bureau of Zhabei district (now Jing’an district), the Shanghai Digital Information System (DIS) Research and Development Center was established in Fenghua High School in 2002, with Mr. Feng Rongshi as the director of the R&D center. The R&D center has realized the integration of production, learning and research, and the production period from product design to end product is much shorter than that of general enterprises. As expected, the products developed have been fully affirmed by the compilation group of physics textbooks, as well as widely recognized by front-line teachers, and soon spread from Shanghai to the whole country. The innovation of experiment has made students and teachers the biggest beneficiaries.

Today, Mr. Feng Rongshi is nearly eighty years old, but he still goes to the laboratory of R&D center every day. In every discussion, Mr. Feng will put forward some surprised new ideas form the perspective of student learning. Together with his team, he constantly seeks new ideas and innovates. Their works are not only easy to use, but also very aesthetic, which is the result of elaborate design, exquisite craftsmanship, continuous polishing and striving for perfection. In 2018, the R&D center won the Innovation Product Award from the Worlddidac Association once more. Mr. Feng Rongshi deserves to be the first “Maker” in Shanghai education community. When I was discussing the work with him recently, I asked him to consider how to train students to be Makers. He has responded positively to this.

The most valuable part in the process of physics learning is to constantly experience experiment activities, to form scientific thinking and inquiry ability and cultivate the rational spirit of seeking truth, questioning and criticizing, and thinking meticulously, as well as the responsibility for meticulousness, conscientiousness and excellence. To this end, for a long time, many teachers have been committed to improving the experiment device and developing the experiment function, and have made great efforts to integrate the physics experiment teaching into the physics teaching. My supervisor, Mr. Feng Rongshi, is one of the best. Since taking the stage of physics teaching, Mr. Feng has made great efforts to change the undeveloped situation of physics experiment teaching in China.

Since February 2002, Mr. Feng has been devoted to the development and application of DIS experiments, and his hard practice has yielded fruitful results. DIS experiments have covered the fields of force, heat, sound, light, electricity, magnetism and atomic physics in middle school physics. DIS has undergone several upgrades from version 3.0 in 2002 to current version 8.0. DIS cultivates students’ ability to learn and explore independently in a digital learning environment, and realizes the integration of physics curriculum and information technology. Today, DIS has become a brand of the Shanghai second stage curriculum reform.

Thanks to Mr. Feng for his contribution to Shanghai physics experiment teaching. His research achievement will definitely promote the development of physics teaching reform to a higher level. As he said, although the results of the research are important, the research process that produces the results is more attractive and exciting.

There are teachers who devote themselves to the study of physics experiments, and those who are familiar with the creation technique, but if want to apply the creation technique in physics experiments at will, one should adhere to the three principles of skillful use, flexible use and developing use, in addition to common use and multi-use. Skillful use means not to copy mechanically; flexible use means to adapt to local conditions; while developing use means to take the initiative and constantly upgrade and transform the techniques themselves, so as to thoroughly understand the ideas behind the creation technique and use all the methods and techniques possible.

2. Please write down your comment on physics experiment teaching in middle school (which is the important basis for us to send you this book as a gift).

Prev: Grand opening of multiple ...
Next: Brighten the Dream Road of...